My in-laws are in town and knowing that my mother-in-law (m-i-l) is always up for a food adventure, we road-tripped to Minneapolis’ Seward neighborhood in search of the Donut Cooperative (DC). Reading reviews the night before, I saw that there are some who really do not like DC pastries. “Worst donut I’ve ever had” and “worst food I’ve eaten in my seven years in Minneapolis” are two of the more memorable remarks. Most reviews were enthusiastically positive, but I was curious what we’d find.

The shop is in the spot of the late, great Cake Eater, a short-lived cupcake shop I had liked. DC was busy, but not crowded, this Saturday morning–a good thing given the small space. We took cinnamon-sugars home for my husband and his dad, who had opted to stay back; the kids got a Chocolate Long John (not filled) and a Vanilla Sprinkle. My m-i-l had the Almond (topped with a good handful of sliced almonds) and I, true to form, chose crazy: Coconut Curry with Golden Raisins. Also took home six small cookies–three m&m, three (Belgian!) chocolate chip. Yum.

DC donuts are yeasty and have a far more complex flavor than what you’d find in any other donut. I removed the raisins (not a fan), but adored the melding of curry-coconut-vanilla. (Am still breathing curry as I write.) My girls gave the donuts a “medium” rating (“not good, not bad,” explained the 9-year-old), but my m-i-l and I were entranced and enamored with the bolder flavor and texture offered by these donuts. They’re not for the faint of heart and I can see how some folks would be unimpressed; these donuts have little in common with the standard bakery or convenience store pastry. But I love how these donuts made me sit up and take notice. You can’t not concentrate on the deep flavor and springy chew when you’re eating one. They demand to be noticed. Whether you like them or not depends on what you want from a baked good. But, by the looks of the steady Saturday morning crowd, there are plenty who want what this store bakes up. (Interesting note: DC was one of the first Twin Cities businesses to use Kickstarter to raise opening and operating funds.)

Next stop was the green-tiled Seward Co-op. I filled my basket with a few bulk items, a pack of local, organic chicken drumsticks (on sale!), and Rochdale butter (it’s delish). The deli beckoned and we had hearty and healthy soups and sandwiches. My m-i-l’s Curried Tomato Coconut soup was the best of the bunch, though my Cosmic Lentil was no flavor slouch. The veggie-centric lunch restored our nutrition virtue after our high-calorie late-morning donut snack. No harm in eating dessert first. 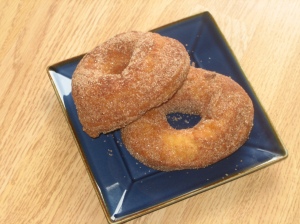 3 thoughts on “donuts, kickstarts, and co-ops”