It was just last week that I cooked my first Guatemalan food. A friend had asked me to help teach a cooking unit to complement her class service project. Her students had made guacamole as a class a week earlier, but Teacher Traci asked me to do a bit of research and come in with a few recipes that would delve just a bit deeper into Guatemalan fare. Crispy corn tortillas and the accompanying black bean paste have already been covered in this week’s posts. Tonight I finish with my favorite of the recipes we made.

Already a fan of bread pudding, I fell hard for Bocado de Reina. I had only a small sample in class, but have since made it at home and devoured all but one slice. It’s a great way to start the day (banana, bread, eggs–how could it not be a Balanced Breakfast?) and is also sweet enough for dessert. Drizzling it with a bit of (fat-free) half-and-half makes it even dreamier.

One student commented that it tasted like a “super moist bread pudding.” Bingo. That’s exactly what it is. I’ve linked the original source below, though I used more than the two cups of bread called for and passed on the raisins. Also, the original recipe didn’t say if the bananas were mashed or cut up. I always have too-ripe bananas on hand, so mine were mashed. The end result was amazing, so I’ll do the same the next time I make it. The lone piece left in the pan is marked for tomorrow’s breakfast, so I’ll be whipping one up again soon. 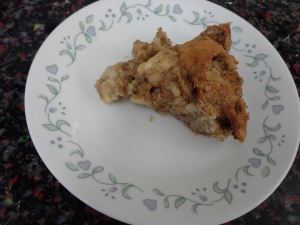 Translated as “bite of a queen,” it possibly suggests this dish is “food fit for a queen.” Stirring a handful of raisins into the batter is optional.