I’ve written before how I love to escape from suburbia and I had a chance to do so today. A friend and I met for lunch at Seward Cafe on Franklin Avenue in Minneapolis. It was a funky and grungy spot–lots of soy on the menu. I enjoyed a TLT, which was multigrain bread spread with Vegenaise, then topped with marinated tempeh and organic tomatoes and lettuce. It had been ages since I’d had tempeh and the tasty sandwich inspired me to pick up a package at a later stop.

Walking back to my car, I passed Shega Bakery and Spices. Thinking it might sell pastries and such, I walked on in. Turns out Shega is an East African grocery store/take-out deli, so I had the pleasure of wandering aisles trying to guess what was on the shelves and what they might be used for. I bought fresh collard greens, a pack of the thickest carrots I’ve ever seen, a sourdough bread labeled Diffo Dabo, and a bag of injera.

now those are carrots

love how it lists “All purpose Water” in the ingredient list 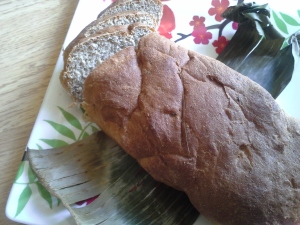 Ethiopian sourdough bread and the banana leaf it was wrapped in

Made from teff flour, injera is an extremely tangy fermented pancake-like flatbread used as food, plate, and utensil in Ethiopian cuisine. I’ve loved injera since first tasting it at an Ethiopian cooking class nearly 20 years ago. The teff flour I once bought with the intent of making my own still sits in my pantry, so I was happy to buy a fresh batch of the finished product.

Next stop: Seward Co-op. I’ve shopped this green-tiled co-op before and needed to stock up on oats and oil. I also picked up a package each of tempeh (a fermented soybean cake that is one of the most meat-like meat substitutes I’ve found) and tofu. I’ll enjoy playing with them in the very near future.

Seward Co-op is easy to spot

I had passed Franklin Freeze on my way over to the co-op, so made sure to circle back to sample one of their 26+ soft serve flavors. Housed in an old Dairy Queen, it is indeed soft-serve mecca, including even vegan varieties in its lineup. I snapped a quick photo of my Kahlua-and-cream cone before it melted, then enjoyed. Sweet and creamy–textbook soft serve. 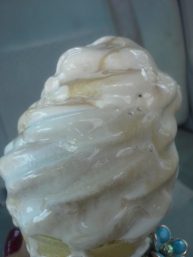 I went a few blocks off Franklin for a quick trip to The Donut Cooperative. I’d been there before, but couldn’t resist returning as long as I was in the area. My chocolate crispy donut and chocolate sandwich cookie were both amazing. They made it home uneaten only because I wanted to take a photo before devouring. 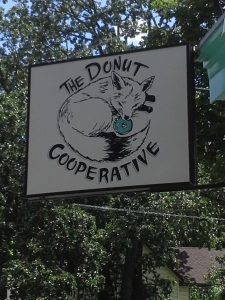 Donut Cooperative got its start with the help of kickstarter 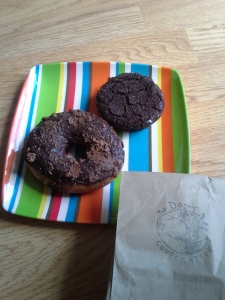 I covered a lot of culinary ground in the few hours I had this afternoon: A healthy lunch, Ethiopian food, take-home soyfoods, soft serve in a cake cone, and amazing from-scratch baked goods. These “field trips” are a huge treat for me. They usually start with at least one planned destination, but much of the fun is what’s found on the aimless wander. It seems there is plenty of deliciousness to be discovered.