I’ve written before about my love of kitchen toys. While I try not to overload my countertops with small appliances that are only occasionally used, I love machines that aid and abet kitchen fun. You’ve seen posts on my grain grinder, soda maker, cotton candy maker, food dehydrator, and immersion blender. This week I added to the fun with a new ice cream maker.

What’s that you say? Didn’t I brag up my “soccer ball ice cream maker” last spring, noting that kicking the ball around for a half-hour was a better way to make ice cream than using a machine? Um, yes, yes I did. But since writing that, I’ve been inundated with ice cream recipes that I really had to try: maple-bacon crunch ice cream, bourbon and cornflake ice cream (It’s called Secret Breakfast and I had it at San Francisco’s Humphry Slocombe Ice Cream. Since purchasing their book, this flavor could be mine for breakfast if I only had an ice cream maker.), chocolate sorbet, popcorn ice cream (already made it once, but had to do it soccer-ball style), everything I’ve found on Frozen Socialism, and then some. If I had to kick that soccer ball around for each amazing batch, making ice cream would become my full-time pursuit. As much fun as that sounds, my family might think differently. Hence, I needed a machine.

For a mere $60, I bought what seemed to be a popular choice among reviewers. The Accidental Locavore had also recommended this model, so I went to her for my first recipe. Her ricotta ice cream was easy to make and lovely to eat. A drizzle of buckwheat honey and splash of 2 Gingers Whiskey made it crazy good. Also purchased with my ice cream maker was Jeni’s Splendid Ice Creams at Home, which I’d seen featured on food52. This pretty book has oodles of think-outside-the-carton ice cream recipes such as Gorgonzola Dolce with Candied Walnuts; Chamomile Chardonnay; and Roasted Strawberry & Buttermilk. I see myself being plenty busy with ice-cream making for a long time to come. This kitchen toy is a hit. 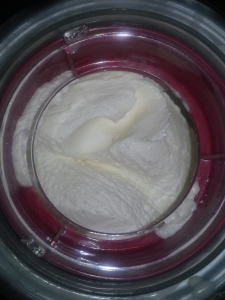 drizzles of whiskey and honey