Working with recipes–whether in cookbooks or on websites–means inspiration is never far away. A recent find was on Hormel’s website. I’d passed over this scone recipe a few times before realizing that it was something I needed to make. And tonight was its night.

My supper menu included leftover chili–tasty, but borderline ho-hum. Pumpkin-bacon (!) scones (originally Bacon Squash Scones) seemed just the thing to make leftovers more exciting. I had just cooked up a batch of pumpkin, so was happy to sub that in for the squash. As well, I cooked up my own bacon instead of using the bits. (Six strips, weighing about 7 ounces total before frying, made just enough for this recipe. The half-cup crumbled bacon weighed just shy of 2 ounces.) I also skipped the maple-powdered sugar glaze as I wanted more savory, less sweet. Instead, I brushed the dough with a bit of buttermilk just before baking. Then, halfway through baking, the scone tops were brushed with maple syrup for a touch of sweetness and extra browning. And instead of spacing the scones 1 inch apart on a baking sheet, I shaped the dough into an 8- or so inch round and cut it, without going all the way through, into eight wedges. They were easy enough to cut through once baked.

The scones were amazing. They worked as a savory side, but I’d take one for dessert, too. (I did, in fact.) They’d make a perfect breakfast or anytime snack as well. Adding a handful of shredded Cheddar cheese and/or a sprinkling of chopped fresh chives to the dough would push them firmly into the savory category; a sprinkle of cinnamon would make them sweet. Amazing, versatile, AND they contain bacon. Triple threat scones for sure. 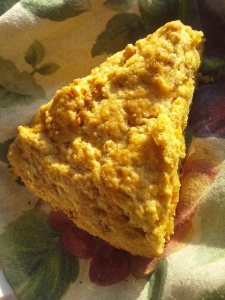