Watching foodie TV (Foodography, the Cocktail episode) last night, I was intrigued by a mixologist who whipped up a batch of bacon bourbon. Both ingredients are favorites (as well as being extremely trendy right now), so I loved that someone thought to put them together. With molecular gastronomy all the rage, I envisioned bacon bourbon being a product of distillation involving beakers, siphons, gasses, and who knows what else. Wrong. It was a simple process involving only the two namesake ingredients–both of which I had on hand. I, too, could make bacon bourbon.

Rendered bacon fat was already on my counter, left over from another recipe. (Though it would have been easy enough to fry up a few strips of fresh bacon if needed.) The other ingredient–bourbon–has been a staple in my pantry since a trip to Kentucky last year. The process, called “fat washing” (lovely, yes?), is simply mixing hot bacon drippings with bourbon (1/3 cup drippings to 3 cups bourbon according to Bacon Today website), letting it cool, then refrigerating to solidify the fat. When chilled and separated, the larger fat chunks are removed. Finally, the bourbon is poured through a fine-mesh strainer to clarify. I also gave it a pass through cheesecloth as my fine-mesh strainer didn’t seem fine enough.

I can’t drink bourbon straight, and the same goes for this beverage. It boasts all of bourbon’s raw power and strength, but also adds a layer of not-so-subtle smokiness. Soda water and an orange rind would make good partners, as would maple syrup. I’ve also found a recipe for a Bacon Old-Fashioned I’d like to try. But for now, I’m happy just to have my bottle of homemade bacon bourbon sitting on my counter, catching the sunlight and promising a lovely and warming cocktail as fall eventually gives way to winter. 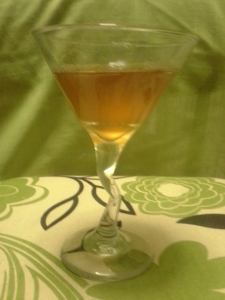 a beautifully golden and smoky spirit, perfectly suited for fall