This morning, a friend and I joined up for a photo shoot for my new website. (Stay tuned!) I had brought a box of assorted produce in hopes of having plenty on hand for whatever happened once the camera started shooting.

With Rachel snapping shots, I chopped red bell pepper, carrot, and asparagus and tossed them into a bowl of couscous, then drizzled all with a bit of olive oil for a colorful salad. A loaf of pumpkin-pecan bread was sliced alongside a lovely fan of thinly sliced apple. Winter squash soup sat next to a tossed green salad and a small bowl of braised Brussels sprouts.

The most fun was finding a photo from Seven Fires, a cookbook I’d flipped through while posing. The charred and stuffed squash was a stunner, and I was lucky enough to have most of the ingredients on hand. We filled the squash cavity with braised Brussels spouts (easy to make–sauté sprouts in olive oil, add a bit of salt and a smaller bit of sugar; cook, stirring, until browned), arugula, and crumbled feta cheese. (Reveal: we had to dab the filling with a bit of yogurt to get a similar effect as I hadn’t brought feta.) The squash looked good on camera and served as a tasty (and healthy!) lunch later on. 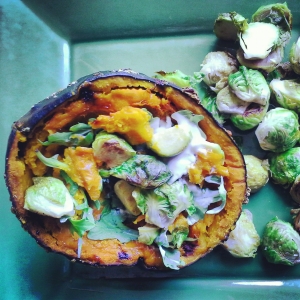 I’m hoping we get some great shots for my site, though there’s a lesson in what we were able to pull together. With a handful of ingredients, we assembled attractive, healthy, and tasty meals ON THE FLY. Neither one of us came to the session with recipes. We hadn’t mulled over how to assemble what we’d be shooting. Yet between the two of us, we created good-looking meal options.

This brings me to my Kitchen Philosophy. Putting together healthy and tasty meals is possible, even on the busiest of nights. There’s so much emphasis put on recipes–my career, in fact, is devoted to recipe developing, testing, and editing. And recipes absolutely serve a purpose even if they’re used solely for inspiration.

But anyone putting meals on the table night after night doesn’t always have the luxury of following recipes. A better plan is to have a pantry full of amazing foods (fresh produce, fantastic cheese, great spices, good breads and grains–whatever you and yours like to eat most) and a good sense of how to throw things together. This “good sense” comes only with practice. Which means you’ll have to take some chances and make some mistakes. But even the chances and mistakes can be fun And the reward–amazing meals that you pulled together solo–is well worth it.