Not a football fan. If the Vikings hit the Super Bowl (unlikely), I’d root for the home team, but still don’t think I’d care overly much. Even the commercials often disappoint after all the hype. I hear you could even catch this year’s Super Bowl commercials online BEFORE the Super Bowl. Whas’ uuuuuup indeed.

But we talk food here, right? And since having kids, it’s been our family’s Super Bowl tradition to spread a plastic tablecloth on the living room floor and watch the game while we eat (relatively) unhealthy fare.

After hosting a big event Saturday night, I didn’t have much get-up-and-go as far as meal ideas for Super Bowl supper. Knowing I wanted to lean toward the carb/cheese/bacon end of the spectrum (tradition must be respected:-)), I microwaved two very large baking potatoes for about 6 minutes, then cut them into wedges. Spritzed with olive-oil cooking spray, they roasted at 425°F just until they started browning (8 minutes?). Next, they were sprinkled generously with shredded cheese and chopped bacon strips. (While heating the potato, I’d baked six or so bacon strips on a wire rack over a baking sheet, again at 425°F. This is The Best Way to Make Bacon–grease drips off onto the baking sheet and you pull the bacon at your preferred doneness, whether its just cooked through, deeply browned and crispy, any point in between.) I also microwaved frozen broccoli florets, which went over the potato wedges along with a handful of leftover caramelized onions. They roasted another 7ish minutes, then were served on a bed of shredded lettuce and topped with grated Parmesan cheese (the kind from a can! only on Super Bowl Sunday;-)), a spoonful of full-fat sour cream, and toss of sliced ripe olives.

I’ll admit to being impressed with my hastily thought through and thrown together meal. It had the bacon, cheese, sour cream bit–potatoes, too–but I managed to get the greens in there as well. Served with root beer floats, we watched the game and helped the girls with eleventh-hour Sunday evening homework. Unstructured, casual, and just plain fun. Tomorrow we’ll sit at the dinner table and eat our well-balanced meal–no TV, no homework. But tonight we enjoyed breaking (multiple) family rules and it tasted good. 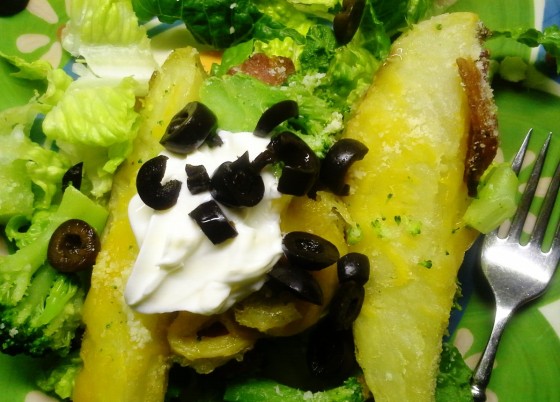