Confession: Reading food blogs was never my original intent. As a food writer, I felt it was important to have a blog. But because my livelihood involves working with recipes–both in the kitchen and in print–my plate was already figuratively (and often literally ;-)) full. I didn’t see the appeal in poring over even more food prose than I was already reading.

Yet growing a blog is easier when there’s connection between writer and reader. And that means going out into that blogosphere and seeing what other folks have to say. In doing this, I’ve found myself repeatedly inspired by the gifted writers and talented cooks who put their culinary finds out there. Case in point: today’s recipe. Foods For the Soul recently ran a series about sneaking veggies into unexpected dishes. Carrot cake oatmeal, pumpkin custard, onion muffins, beet brownies–all intriguing. But a recently acquired can of beets meant that the brownies would get the first shot.

So I did it–I made beet brownies. 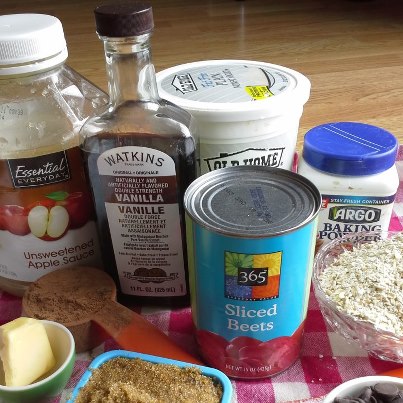 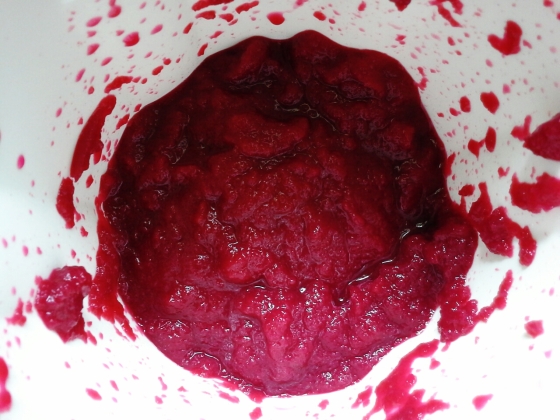 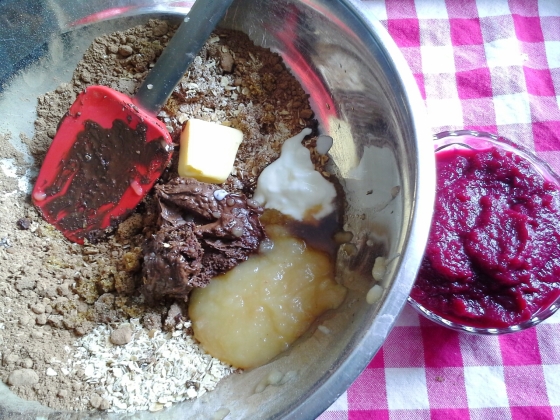 ready for the pureed beets 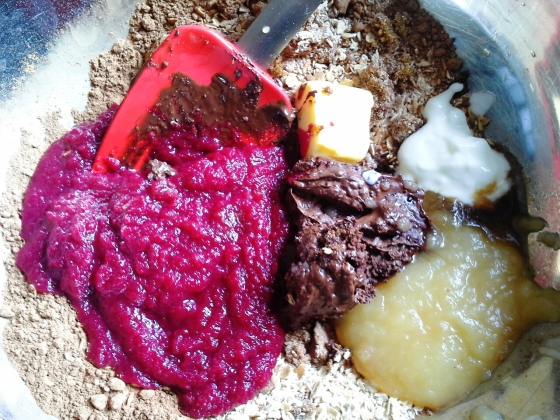 It was a pretty enough process–ruby-red beets pureed to jewel-like brilliance. Fudgy melted dark chocolate. Golden and powdery ground oats. But even with all of the goodness, I had my doubts. Though I wanted to like these brownies, I wasn’t sure that FFtS’s claims of their being “dense, moist, rich, and fudgy — everything a brownie should be” would play out.

One tablespoon of fat (I used butter, though the recipe asked for margarine or shortening) seemed paltry. Subbing beet and applesauce in for eggs, using ground oats instead of wheat flour–none of it boded well for a sweet treat as all-American as the brownie. While the cocoa powder and melted chocolate were promising, I hedged my bets by chopping up a Mast chocolate bar with dried cranberries–high-end craft chocolate from Brooklyn, NY’s bean-to-bar shop–to stir into the batter. 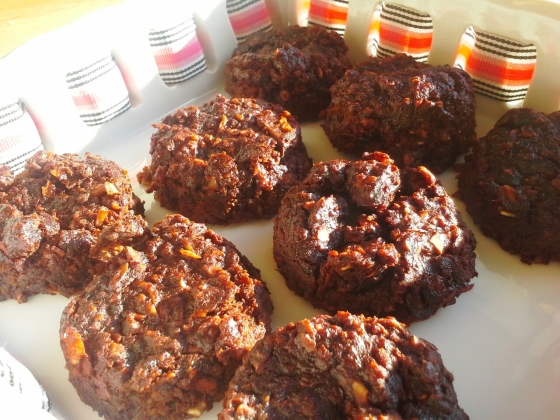 Pretty, yes, and also plenty moist, but I wouldn’t call them “brownies.” Chocolate-beet cake seems a better descriptor. I might appreciate these for what they are–a healthier version of a higher-fat baked good–if it weren’t for my biggest objection: these “brownies” tasted like beets. And while tasty roasted and topped with crumbled blue cheese, beets just don’t work (for me) in brownies. I’ve never liked canned beets and just couldn’t get past the astringent tangy aftertaste of these cakes. (Taste is a subjective thing, though, so you might like these. FFtS had high praise!)

While technically this was a fail (the brownies ended up in the trash–yikes), I still count it as success: I tried something new and now know how beets work in brownies. (Not so well.) FFtS’s carrot cake oatmeal still beckons and I’ll continue to seek out food blogs–both old favorites and new discoveries. Its been a fun and delicious community to join.