“Blog” is a relatively new word for most. Wikipedia cites its first appearance in the late 1990s and only in 2009 did it take off on a more personal level. (Credit for definition and graph goes to google.)

I never imagined I’d author something with such a funny name, but here I am. (And here you are–you’re probably doing it, too.) Food for Fun was born because it seemed important for a food writer to have a food blog. It’s been rewarding and a favorite part has been the community of like-minded (and some not so like-minded, but fun just the same) folk I’ve come to know.

An unforseen bonus has been having clients bring me on as guest poster for their sites. As it’s all food related, I’ll offer links here–please give them a look-see. The salad alone make them worth the read. Promise.

But I won’t just send you elsewhere to read other blogs. Food for Fun is about content, folks 😉

First up: I’ve become of fan of celery simple syrup, which goes especially well in gin and vodka cocktails. It’s also a great way to use up those last few ribs of celery that always seem to be hanging out in the crisper. For each 2 ribs chopped celery, add 3/4 cup each water and sugar. Boil 5 minutes; drain and voilà! It’s sharply flavored enough that you’ll know the celery is there, but mild enough to be a versatile and interesting addition to lighter cocktails.

Second: How-To sour mix (margarita, anyone?) posts are everywhere, so this may be old news, but having tried it once, I always keep a stash on hand. It’s tasty enough to drink as-is, but a dilution of at least soda water makes is irresistible. And it shines in tequila-based drinks, absolutely. 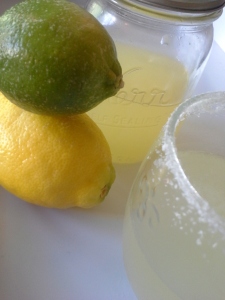 Making the homemade sour requires more muscle than does the celery syrup as it calls for a cup each fresh lemon and lime juice. After much squeezing, the juices are poured into a premade simple syrup (boiling 1 cup each sugar and water until sugar dissolves). Its bright and fresh flavor set it worlds apart from store-bought sour and there will be no going back if you haven’t already made the switch.

Third: Now that your cocktail pantry is stocked, we’ll roll some peanut butter balls. A recent project put me close up and personal with oodles of peanut butter recipes–most of which I want to make immediately as they look so amazing. Because I’m paid for working on the recipes on paper and not in the kitchen, I hadn’t tried any. Until I came across this 3-ingredient, 5-minute recipe that demanded to be made NOW. You’ll like them, too, I think.

adapted from a Skippy® recipe

I’ll be back next week with a more cohesive post, though hoping you enjoyed today’s smorgasbord of goodies.

54 thoughts on “being a guest, DIY cocktail mixers, and pb graham poppers”