Last week’s post mentioned that I was “taking it easy,” which many of you (accurately) pointed out wasn’t really the case. When does taking it easy include making a pot of soup, loaf of banana bread, lovely cake and caramel sauce, and pumpkin waffles? Yet keep in mind that my profession–and obsession–puts me in the kitchen. And as it is for many of you, the kitchen is my playground. Strangely enough, it’s the weeks I don’t have time to be in the kitchen that are my busiest and most stressful.

Now THIS week, though, I’m really going to take it easy. Really. Because all I’m going to do (well, mostly all), is send you over to yesterday’s Blog of Funny Names in Food post. It was fun to write and I’d love for anyone who hangs out at food for fun to also see what I’m putting out over there. It’s a once-a-month gig and I’ll continue to highlight it here when my turn comes around. (Which, btw, I spaced last month. Read this if you want to see what a hastily thrown together blog post looks like.) So. You head over to read at least the latest waffle iron (spoiler alert, yes) post and I’ll wait here. Promising you something tasty when you return!

Alrighty then, you’re back? Signed up for the Cornelius S Waffle event on facebook? Excellent. Because I promise to never send you home empty-handed, we’ll finish with two recipes that were posted months apart on the same blog. Last April, I mentally bookmarked the first and when the second posted a few days ago, I committed to making them both. Then the waffle flag started flying–it was time.

I admit to being one of those maple syrup snobs–shunning anything in a plastic squeeze bottle on grocery shelves. If it isn’t pure maple syrup (preferably from a local artisan), I’m not buying. When I saw Kitchen Simplicity’s DIY syrup recipe, I was a bit taken aback, but the ingredients looked wholesome (read: no corn syrup) and it seemed a fun project. Ditto when I saw her buttermilk version go up.

These recipes are as easy as it gets. They both came together in under 10 minutes–not 10 minutes each, mind you. I made two syrups in 10 minutes. Now I have two lovely homemade syrups and they’re amazing.

We’ve already enjoyed them on pancakes and waffles and next up will grant my daughter’s wish of pouring over ice cream. They’re going to be grand in cocktails as well. 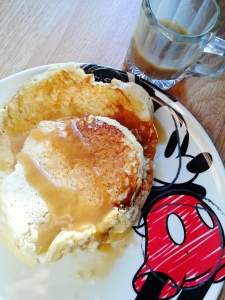 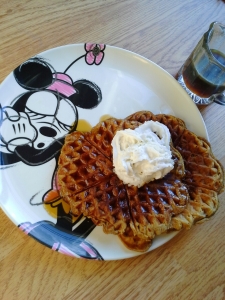 oh, so sweet on waffles 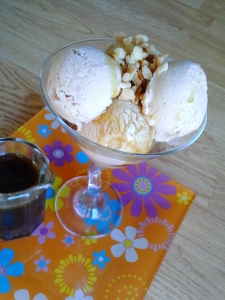 add a bit of soda water, and this could be a first-rate cocktail

If you’re up for “taking it easy” this week, I suggest you get into the kitchen and cook up syrup. It’ll be the easiest DIY you ever do.