Anyone else feeling the crazies lately? The end-of-school-year crazies when you run to games and banquets and recitals and whatnot? When you run in circles and fall so behind on sleep that you forget to write your weekly blog post? It happened to me last week and by the time I realized what was up, I decided to do what Disney’s latest darlings would do and let it go.

So here I am a week later, ready to hit it again. Same recipe I meant to write up last week. Still excited enough about it to put it out there.

ok, this one might be a little bit too big

Another addition to my “crazies” last week was a 4-hour food blogging class with the awesome and amazing Claire Stanford at Loft Literary Center. After two years of hosting food for fun, I figured it was time to learn how it was supposed to be done.

I came away with more than a few ways to shake things up a bit. A new bio, for one. Also new: bigger photos. Claire told her room full of aspiring food bloggers to Own Our Photos. Make ’em big and offer a beauty shot first thing.

So those ‘cakes: If you’ve read Attempts in Domesticity, you’ve noticed J’s delight in making recipes from Bon Appetit and other upscale food publications. While I enjoy these magazines as well, I don’t often cook from them and if I do, I’ll rarely post my attempts at recreating a recipe developed, tested, and published with the backing of a professional test kitchen. But that changes today.

Fine Cooking recently published a recipe for scallion pancakes that stuck with me. Before I knew it, I was at the store buying two bunches of green onions. Short on time, I skipped the dipping sauce (a must-make next time as it looks fantastic) and the pancakes went together more quickly than you can say “yum.” Flour, eggs, chopped green onions, water (does that even count?), salt. Oil for frying. That’s it.

They’re lovely warm, they’re lovely chilled. They’re delicious for breakfast, lunch, dinner, anytime in between. They’re great as-is and also spread lightly with butter or jam. Roll them up crêpe-style. Eat them with fork and knife as you would any other pancake. Take one directly from serving plate to mouth with your hands. It’s all good folks. These pancakes are that amazing. The onion brings a bit of tangy bite, but mostly they’re soft and tender and custardy. Highly recommend. 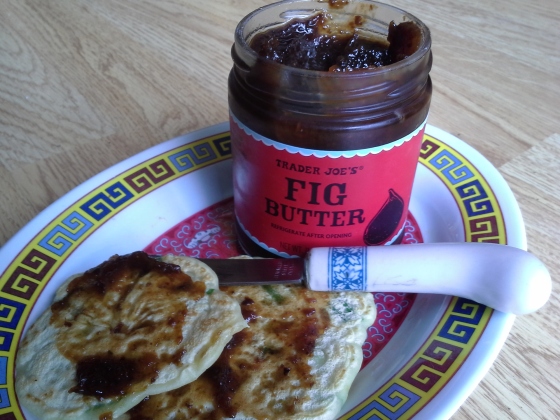 Here’s to great recipes and larger-than-life photos and food blogs. There’s much inspiration to be had in the blogosphere and I’m grateful to have found so many amazing blogs to read and follow. Thank you for coming over to mine!

64 thoughts on “owning the scallion ‘cakes”