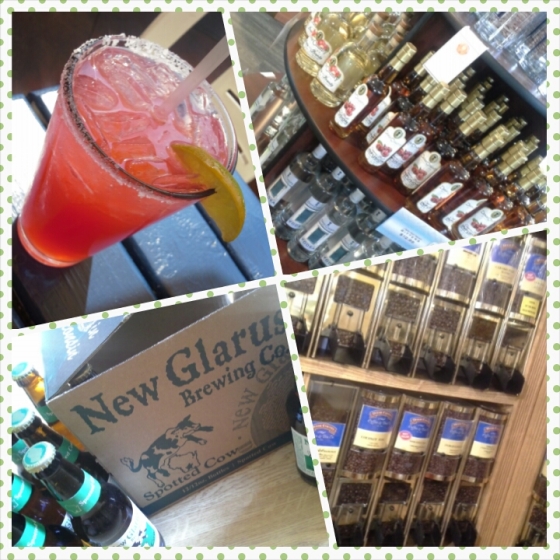 Life was sweet last week when food for fun took a quick trip to Door County, Wisconsin. Next on our list are the beverages enjoyed on my recent foodie vacay.

Quick recap: A friend invited me to join her for a few days in a lovely little cottage on this scenic peninsula dividing Green Bay and Lake Michigan. Picturesque is the perfect word, but so is delicious. I ate and drank with near abandon and we’ve already looked at the sweet stuff. This week, we find the tasty sippers that kept us hydrated.

Our first night in town we enjoyed sandwiches, fries, and a beer at a local tavern. The lighting was poor–as it should be in a tavern–so no photos, but the beer was noteworthy. New Glarus Brewing is famous throughout Minnesota as “that beer you can only buy in Wisconsin.” This microbrewery crafts a number of different brews, but none more well-known than Spotted Cow.

A tasty beer, Spotted Cow is interesting and lively without being offensive. I’m no beer aficionado, so won’t even try to describe flavor notes outside of it tasting a bit like corn while also being wheaty. (see how bad I am at this!) Let’s just say it’s a beer for which folks–myself included–are willing to cross state lines. Our last stop before returning home was a gas station where I bought a case of Spotted Cow to take home for summer sipping. 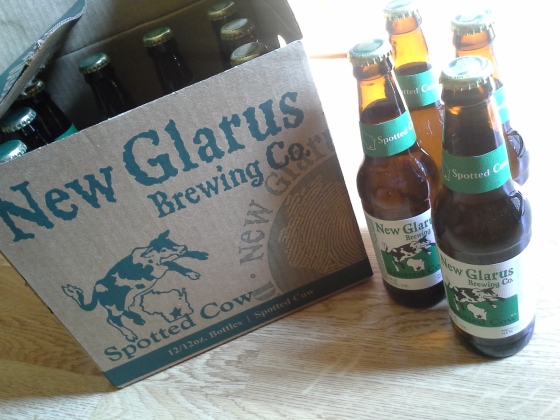 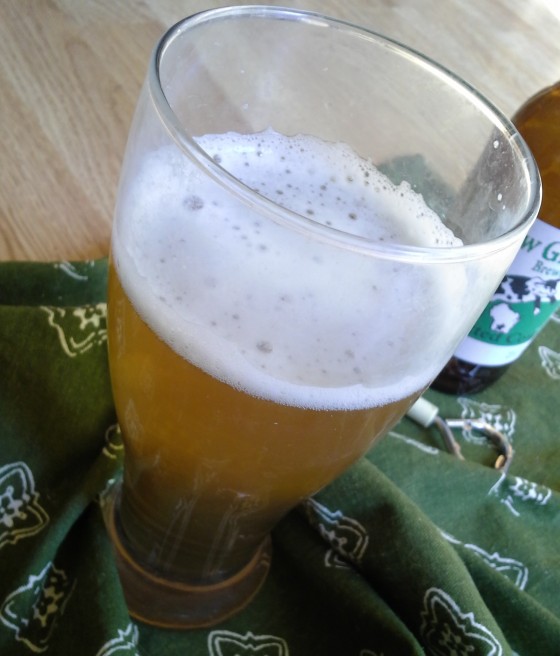 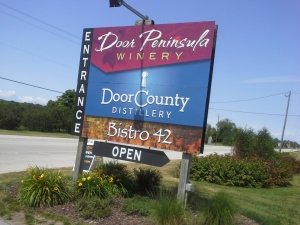 The next afternoon we put Door County Distillery at the top of our list and went off in search of whiskey tastings and what not. The distillery itself was a part of Peninsula Winery, which we’d seen signs for everywhere. The operation seemed a bit touristy, but I was happy to pay $5 for a shot glass and small pours of their Apple Brandy, Luminous Vodka, and Young Brandy. 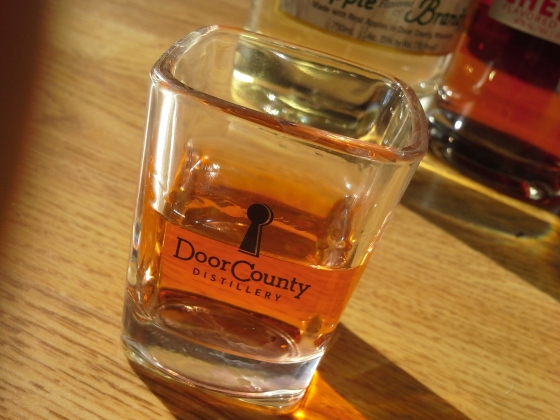 They all tasted well enough and it became clear that my spirit collection was not complete without apple brandy and cherry vodka. 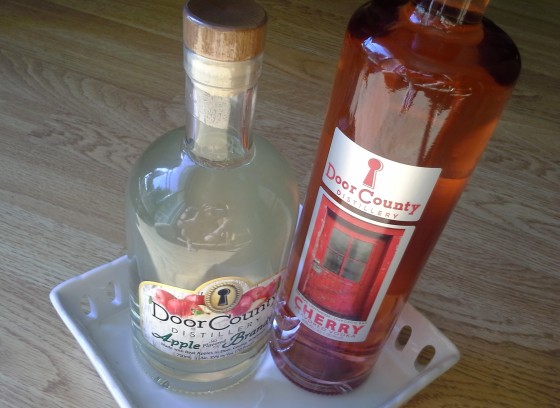 What I enjoyed most, though, was the red solo cup (!) filled with vodka lemonade I bought at the distillery shop. The distillery knew what it was doing as the shop emptied into a larger gift store where free wine tastings were held (though the lines were long enough that we passed) and Peninsula wines as well as Door County fudge, jams, jellies, barbecue sauces, flavored olive oils, and other food stuffs were sold. My lemonade vodka-fueled good spirits translated into a good amount of purchases, one of them a fantastically fruity punch-like wine with a fantastic name. 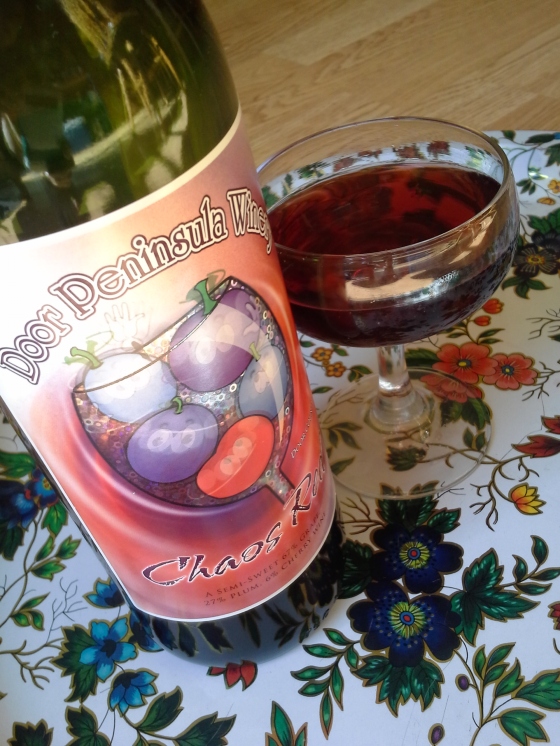 Coffee was clearly needed at this point, so it’s a good thing Door County Coffee & Tea Co. is just across the road from the distillery/winery. Again, the shop oozed “tourist,” but that didn’t stop us from enjoying the sea salt caramel pastry and a lovely espresso drink seen in last week’s post. As well, I purchased a package of Door County cherry coffee beans to brighten up my non-vacation mornings. 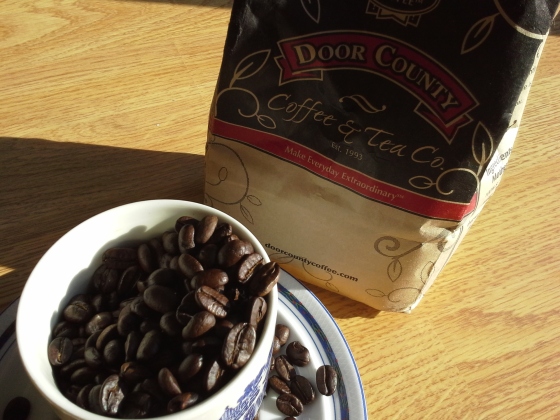 Next up was lunch at Shipwrecked Microbrewery, Pub & Inn, which seemed the logical place to order a beer. But instead I was pulled in by their lovely raspberry gin fizz. 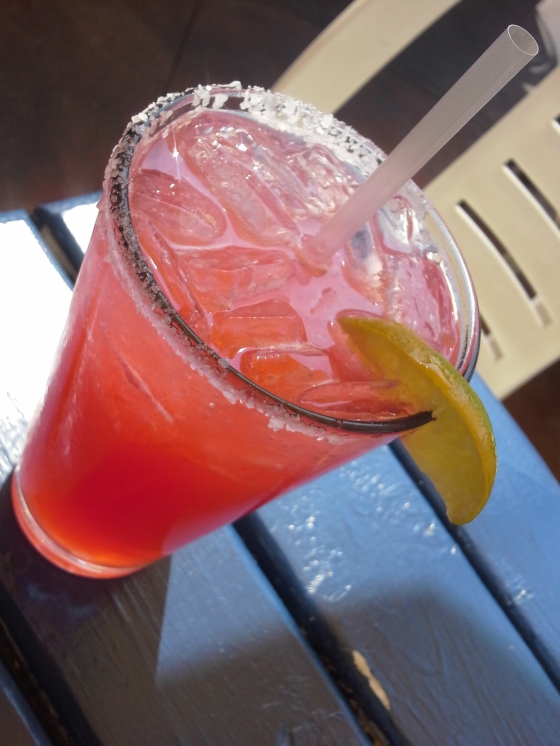 The runaway beverage hit for me was  Island Orchard Cider, a Normandy-style cider distillery in Ellison Bay. Their description of “Normandy-style” goes like this:

“French cider makers… have long maintained a more wine-like style of cider. Their ciders are often lower in alcohol and less sweet than their British counterparts, with fruitier flavors, a lighter texture, and higher acidity. This greater complexity and their acidity in particular make them especially good with food.”

Just off the main highway, the building was unimposing and a bit of a ramshackle affair. Slick and touristy it was not, which was why I loved it. The (free!) tasting included generous pours of its four varieties of apple and pear cider, ranging from the über-dry Brut Apple to the sweet Apple Cherry. 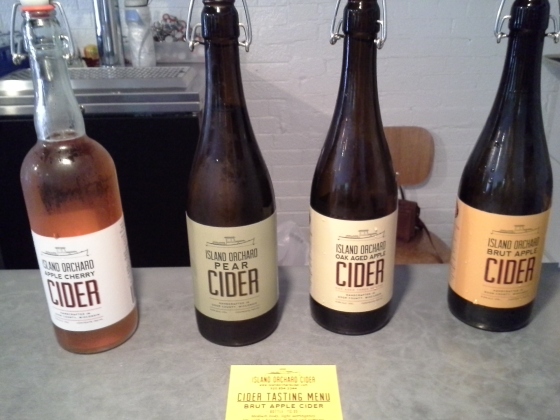 The cider went well with an impromptu picnic of cheeses, meats, and crackers that we snuck in before attending The Fish Boil, both of which you’ll find here next week.
Our visit to the drinks of Door County has ended and I thank you for allowing me to sift through memories. I’d love to have you back again next week when we munch on the savory side of the lovely vacation paradise that is Door County.

40 thoughts on “the drinks of Door County”