Once again, summer is having its way with me. It should no longer surprise me that once my kids are out of school, I have less time for blogging and other work-related projects. It’s simple math. Just the same, I always find myself thinking that next week will be the week when I get that blog post out.

After telling myself this for the past 10 weeks or so (!), I am finally ready to publish another edition of Great Aunt-Helen’s Recipe Box. And because I’ve also neglected my Cocktail U posts, this week’s pick from Helen’s box is an adult beverage. (Talk about an eclectic collection!) 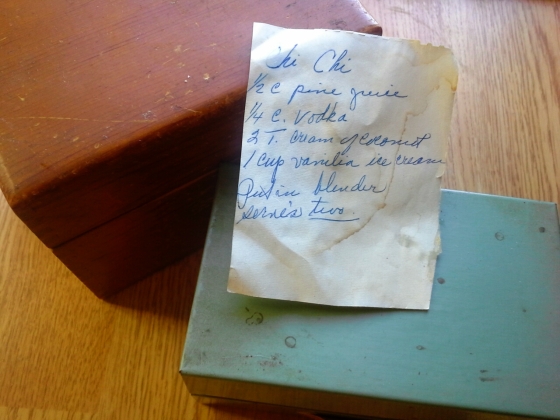 Helen’s recipe for Chi Chi gave me a giggle. Scribbled on a small piece of paper, it didn’t even rate a recipe card. I wondered if Helen had sipped this at a friend’s card party or if she had made a batch for one of the many tailgate parties she attended for Minnesota’s Golden Gophers. Perhaps it was made to celebrate one of her friend’s birthdays. (Stories are told about Helen and her group of friends getting together often to share meals.) However she enjoyed it, Helen considered the Chi Chi worthy of her recipe collection and we are now the beneficiaries of that decision.

This is the first of Helen’s recipes that I have altered significantly. Not fond of pineapple juice, I wanted to find another fruit flavor to use instead. And though I had an unopened can of cream of coconut on hand, I had a carton of opened coconut water on hand. In the interest of emptying the carton (despite it being from Trader Joe’s, coconut water did not endear itself to me) and knowing that opened usually trumps unopened, I used the coconut water instead of the pineapple juice and chopped up a peach to add fruit. With ice cream as its main ingredient, this drink wouldn’t miss the 2 tablespoons cream of coconut.

So we end up with this:

The final beverage was tasty as tasty can be. Dessert-like and über-refreshing. My liberty with the inclusion of fresh fruit and substituting coconut water for the cream of coconut and fruit juice means that pretty much anything goes. You can use your favorite fruit and sub in another fruit juice or dairy-like beverage as well. The vodka and ice cream seem non-negotiable, though you’re free to mix it up however you’d like.

I believe Helen would have enjoyed my version of her Chi Chi and I hope you do, too. My plan is to return next week with another pick from Helen’s recipe files, but if I don’t turn up you’ll know I’m riding the roller coaster that is summer. Hopefully with a Chi Chi in hand! 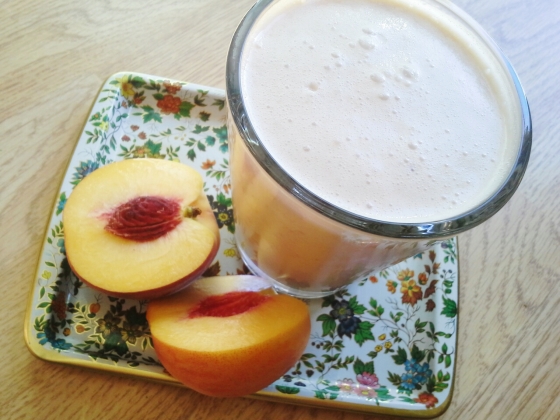 23 thoughts on “cha cha with the chi chi”