Last week’s Brazilian Rice could only be followed by a Brazilian cocktail, am I right? And what better drink than a caipirinha? (Repeat after me: kype’-ah-reen-ya.)

As a Midwesterner, I was unaware of this lovely drink until five or so years ago when a friend whipped one up for me at a party. He spoke of his time as a foreign exchange student in Brazil and learning there about cachaça. I was enamored by the drink’s simplicity (spirit + lime + sugar), but with the spirit as obscure as cachaça, didn’t see myself making it often. I enjoyed my caipirinha and moved on.

Then came the 2016 Summer Olympics and Brazil was everywhere. When I heard caipirinha mentioned on a post-game television feature, I paid attention.

Considered Brazil’s national cocktail, the caipirinha is made with the aforementioned cachaça, a Brazilian sugar cane brandy. It’s similar to rum, though rum is made from molasses and aged longer so can be the stronger of the two both in flavor and alcohol content.

Cachaça isn’t so very hard to find now and with it on the shelf, a caipirinha is easy to make.

And refreshing. And delicious. Perfect for warm weather, a caipirinha screams “woohoo!” It’s light, slightly fruity, somewhat sweet, and has a kick. If drinks had personalities, this one would be the life of the party. 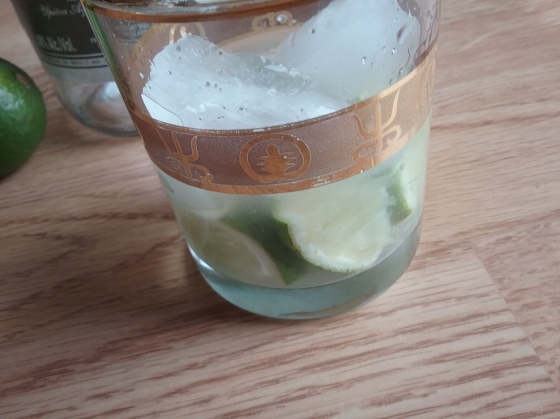 Whether this is a good accompaniment for our Brazilian Rice, I can’t say. First impulse is to say no, but there’s also argument that the rice is a mild, if somewhat salty dish and a sip of caipirinha between bites might level the playing field again. Maybe not such an odd combination after all. 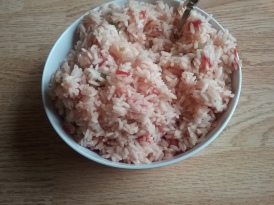 You be the judge. Invest in a bottle of cachaça (if you buy on the lower end, it’s not too terribly spendy) and you can whip up your own Brazilian cocktail at moment’s notice. If you live in a place where cold winters are out and warmer springs

will soon enough lead to hot summers, this would be a good drink to have in your repertoire.

There are plenty of caipirinha recipes to be found online. They differ slightly in amounts of sugar and spirit, though half a lime seemed to be standard. White sugar was most commonly used, though I did see a recipe using brown. I’d imagine agave syrup would be a tasty sweetener to use as well. Here’s what I did:

In glass, muddle lime and sugar. Add ice, then cachaça. Stir and enjoy.

Should I be able to keep to a weekly schedule, you’re welcome back next week to look up another of Great-aunt Helen’s recipes. If it takes longer to return, you’re welcome then as well. Just mix up another caipirinha while you wait. Thank you for being here!

14 thoughts on “cachaça in the caipirinha”