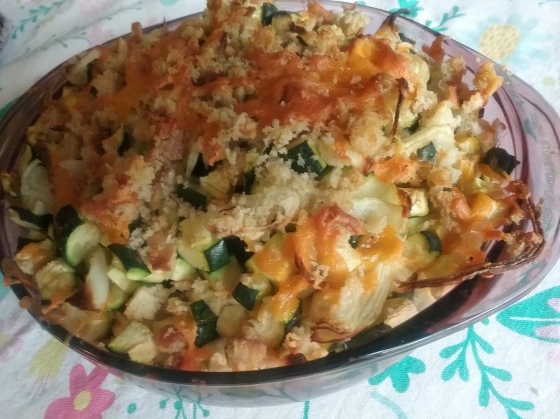 When food for fun started flipping through Great-Aunt Helen’s recipe boxes, I promised myself I would avoid any and all casserole/hot dish recipes. As equal-opportunity as I am with most foods, I have been known to turn my nose up at these quintessential Midwestern one-dish meals. Maybe it’s the canned cream soups they often contain. Maybe it’s their combination of ingredients better enjoyed separately (tuna + tater tots ??). Whatever the reason, you won’t see hamburger macaroni hotdish on my dinner table anytime soon.

Why then, did I pick this well-worn recipe card from Helen’s box?

Partly chosen because it is credited to Rosette, my paternal grandmother, Green Zucchini Casserole looked like something I could get into. I had just bought zucchini at a local market and dressing it up a bit with cheese and (buttered!) breadcrumbs seemed a fine idea. Increasing its appeal: Only a few ingredients and plenty of wiggle room. Amounts weren’t given, nor was baking dish size. Plus, the last line of the recipe cracked me up. Almost a dare, it “was liked by all.” Why not give it a whirl?

Last time we visited Helen’s Recipe Box, I had discovered a bunch of her papers, letters, etc. Going through these stacks will fuel dozens of blog posts and I hardly know where to begin. There are programs from her attendance at Queen Elizabeth’s coronation in 1953 (!) as well as a Christmas card from said Queen. Also, lovely full-size menus from the ship she sailed on to London. Wonderful all, but a better segue for zucchini casserole is the first paragraph of a Christmas letter she wrote titled “Chronicles of ’80.”

There is light snow on the ground and the sun is streaming through the kitchen window, lighting the four red blossoms and many buds on the hanging basket of Christmas cactus and on the row of cherry tomatoes ripening on the window sill. A long and benign fall made it possible to leave plants outside well into November. I still have marigolds in a sunny window.

This woman loved her plants. Flowers, herbs, vegetables, berries – she grew them, tended them, enjoyed them whether outdoors or lined up on her window sill. I don’t remember specifics of what she grew, but with zucchini known for overproducing, she probably had plenty to cook and bake with. (Recipes for zucchini cake and bread are in her boxes as well.) Green Zucchini Casserole almost certainly made use of home-grown zucchini and if she served it when family or friends joined her for dinner, it was probably indeed liked by all.

Should you want to give it a go: 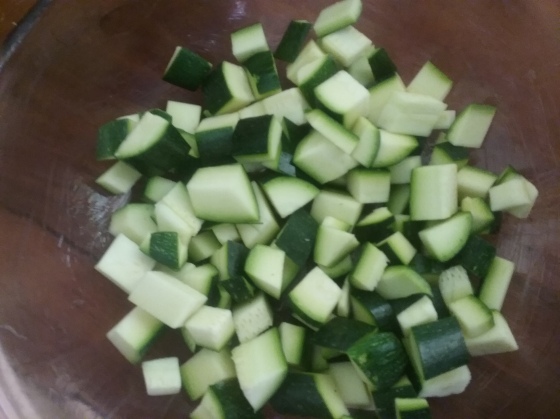 I used a round 1 1/2-quart baking dish and a total of about 7 or so cups cubed zucchini. No green onions on hand, I subbed in thinly sliced onion and minced garlic, about 1/3 cup total. 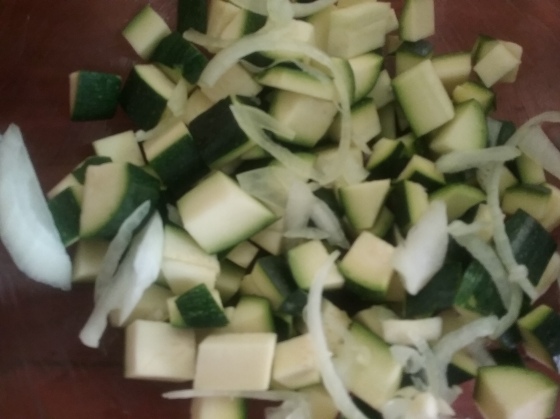 After tearing a few pieces of dried baguette into crumbs, I mixed in a bit of softened butter, giving me about 1/2 cup to sprinkle between layers as directed.

I used about 1 1/2 cups total shredded Cheddar. Four layers of each ingredient brought my baking dish to full capacity.

Though the recipe mentioned that the final dish would shrink to half its size, this did not happen. Which is just as well as the heaped casserole was lovely and impressive.

To say that it was “liked by all” was a stretch for my table. Both daughters thought it “yucky” and my husband doesn’t like zucchini on a good day so this did not work for him. Not a problem as I will gladly eat this for lunches and dinners until it’s gone.

The zucchini surprised me by staying bright green instead of overcooking into olive-green oblivion. As well, the thinly sliced onion, crunchy breadcrumbs, and pockets of gooey cheese provided all sorts of flavor and texture contrast. Plain and simple. Showcasing fresh produce. It’s all good and I’m glad to have picked this one out of the box.

What we’ll drink with it next post, I don’t yet know. But we’ll figure it out and I hope to see you back here when we do.

11 thoughts on “on Christmas Chronicles and zucchini casserole”