I’ll admit to not being on top of the blogging game this week. My posting day arrived, but still no sense of what to write up. While my week was full of the usual food-related projects along with a handful of meals out, nothing had struck me as blog-worthy. And truth be told, sometimes I just get lazy. Having to track details, take pictures, etc for a post can (sometimes, not always) suck fun from a food adventure.

So today’s “inspiration” was forced and also a bit lazy. I grabbed Momofuku Milk Bar, Christina Tosi’s amazing cookbook, from the shelf and flipped through until I found a recipe that looked tasty, used minimal ingredients, and took little time to throw together. And boy howdy, did I strike gold.

Momofuku has been featured here before and for those who haven’t heard of this crazy little New York sweet shop, know that it’s famous for Crack Pie™ as well as crunches, crumbs, cereal milk, brittles, and the like. Tosi has an imagination like no other along with a willingness to think waaaaaaay outside the pastry box. She’s the proverbial kid in a candy store except that she’s in charge of the candy store.

What caught my eye this go-round was her Liquid Cheesecake. A dessert in itself, it’s also an ingredient in ice cream, sorbet, layer cakes (both apple and carrot), and truffles. Tosi is an excellent communicator and only her words will do her thought process justice:

…I’m kind of a fan of the gooey, just-barely-baked approach to making something delicious. There’s just something so naughty and fulfilling about the texture… Once I’d settled into my role as pastry chef at Momofuku, I knew I had every right to eat magically thickened cheesecake filling in the confines of my new home…so began my search for my voice in the form of cheesecake. It was short journey: my heart beats for one and only one kind of cheesecake–the underbaked, messy kind. And so, my signature cheesecake is liquid cheesecake.

Should you share Tosi’s obsession for ooey-gooey goodness, I suggest you find yourself a copy of her book. It’s a fun read and a great kickstart for crazy-good dessert ideas. But if you can’t wait to make liquid cheesecake, here’s what I did:

In small bowl, whisk together 1 tablespoon cornstarch and 1/2 teaspoon salt; whisk in 2 tablespoons milk. (I used almond milk.) Whisk in 1 large egg. Beat cornstarch slurry into cream cheese mixture on medium-low speed 3 to 4 minutes or until smooth and loose. Scrape down side of bowl. Stir in 2 or so cups chopped chocolate, miniature candy bars, and cut-up marshmallows.

Scrape mixture into 9-inch graham cracker crust. Bake 15 minutes; gently shake pan. Remove from oven if cheesecake is firm in center and jiggly around edge. If mixture is jiggly all over, bake 5 minutes more. Add another 5 minutes if needed, but, in Tosi’s experience, “it shouldn’t take more than 25 minutes to underbake a cheesecake.” Cool cheesecake completely, allowing to set. Store in airtight container in refrigerator up to 1 week.

Note that the candy stir-ins and graham cracker crust were my spins. Tosi bakes in a 6-inch square pan lined with plastic wrap and describes the final “cheesecake” as “pipeable and pliable enough to easily spread or smear, while still having body and volume.”

I’ll close with a warning: This cheesecake is deadly addictive. As expected, it’s creamy and rich, but the chopped candy makes it über-sweet as well. What starts out as one spoonful easily leads to two, then three, etc. And before you know it, you’re regretting those last bites. (or so I’ve been told 😉 ) This is a sweet treat meant to be enjoyed in small portions. 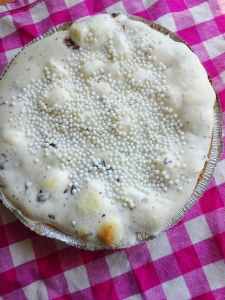 Liquid Cheesecake Pie, not for the faint of heart!

If the description and picture didn’t sell it, I offer one more reason to love liquid cheesecake:

so not what I was going for

It’s supposed to look like this! I’ve had similar baking experiences that were considered fails (see pink squirrel pie at right) and it seems the same result is a major success here.

Hats off, then, to Christina Tosi for her envelope-pushing sweet treats. I love how she thinks and am ever grateful for her inspirations.