Anyone who writes, reads, comments on blogs would attest to the power of online communication for building relationships. Ditto for facebook, twitter, etc. We’ve all made friends we’d never have imagined meeting outside of online connections.

Today’s story is about such a connection, though it goes back 12 years, before blogs, facebook Likes, or tweets. Remember the chat room?

With little to do at the end of my first pregnancy (I had stopped accepting new projects in anticipation of first-time motherhood and the nursery was ready and waiting), I found myself newly addicted to a television show I’d enjoyed in the ’80s. Discovering its virtual chat room linked me to others following this cult favorite. Thus my bonding with Scarecrow & Mrs. King fans began.

It’s with some embarrassment that I ‘fess up to having been into this show (admitting to a trip to LA for SMK’s 20th anniversary reunion doesn’t help my street cred either), though I will forever be grateful as it formed a friendship I still hold today.

Di–watching SMK in Great Britain–was brilliantly funny and we soon moved on to emails and exchanging packages (though she’s much better at sending than I am). We’ve met up in LA, Vegas, Boston, D.C., and DisneyWorld and I’ve hosted her in my home as well.

Though Di would never call herself a “cook,” her bear, Ted, has posted the occasional culinary delight. Most recently, he showed up on his Twitter feed with a piña colada cake. And when Di sent me the recipe, I was on it like a maraschino cherry on a pineapple ring.

TourGuide Ted’s cake is much prettier than mine.

Luckily I have a kitchen scale and working knowledge of google as I needed to weigh ingredients and translate British cooking terms such as sandwich tins, caster sugar, and Gas Mark 3.

In the end, my cake baked up flatter (didn’t have 7-inch cake pans, so used 9-inch) and was less pretty (bought two cans of pineapple tidbits instead of one each rings and tidbits–oops) than what Ted had whipped up, but it couldn’t have been any less delicious. Moist, sweet, a little bit boozy, the cake offered texture contrast with moist pineapple pieces and shredded coconut. I put away three (not huge, honest) slices before I could stop eating. 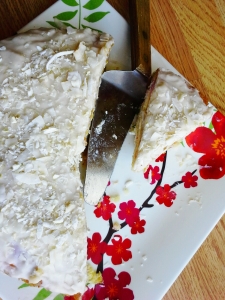 kept going back for more 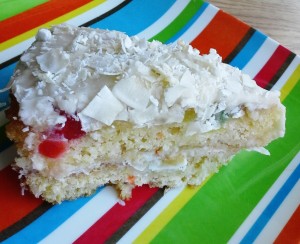 In the spirit of the recent Winter Olympic games, food for fun salutes all its readers–international and domestic–with a cake that is good enough to bring about World Peace. And hopefully a spring thaw for those in northern climes.

Piña Colada Cake as told to an American food editor

In mixing bowl, beat together 6 ounces butter and the caster sugar until light and fluffy. Beat in eggs, rum, and vanilla until blended. Fold in coconut, flour, baking powder, and pineapple pieces. Add more rum if mixture is too thick to pour. Divide batter between pans. Bake on same oven rack 35 to 45 minutes or until cakes pull away from sides of pans and wooden pick inserted in center of cakes comes out clean. Cool (pineapple-side-up for pan with rings) on wire rack.

To make filling and frosting, sift icing sugar into large bowl. Add 1/2 cup butter and small amount of liquids; mix until smooth. Add liquids to taste until mixture is smooth and spreadable. (Here Ted mentions that it is important to keep tasting, though he is speaking specifically about the rum at this point.)

When cake layers are cool, place bottom half (without pineapple rings) on serving plate. Spread with about half of frosting; top with remaining cake layer, pineapple-side-up. Spread remaining frosting around side of cake. Top with coconut as desired.