And we’re back. It’s been another crazy-long hiatus as deLizious tries to keep home and hearth up-and-running. But I’ve pledged before and will reiterate that Aunt Helen’s recipe box is far too important to let go. I want to keep … END_OF_DOCUMENT_TOKEN_TO_BE_REPLACED

When my cousin married his Kentucky bride, theirs were not the only lives changed. Traveling to Kentucky opened my eyes to the world of bourbon. On that trip, I learned that bourbon is bourbon when it’s produced in the United … END_OF_DOCUMENT_TOKEN_TO_BE_REPLACED

Fast-forward to supper and I was thinking pork chops. A search for said chops turned up empty (they’re in the freezer somewhere, I’m sure of it), so eggs were next on my list. But how to prepare? The chocolate mousse I’d been envisioning all day became my cooking muse as I pictured whipping lots of air into eggs to make a soufflé. It was an unusual path for the cooking muse to take me as it’s been a decade since I’d made a soufflé. But the idea took hold and I gamely found a recipe (from Richard Sax and Marie Simmons’ most excellent Lighter, Quicker, Better) and hit the kitchen. 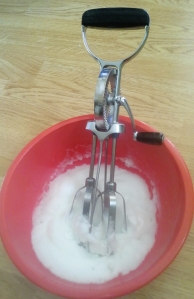 whipping egg whites for the soufflé with vintage rotary

The recipe called for more steps than I usually take in evening meal prep, but I knew the steps were there for a reason so went ahead and made the wax-paper collar for the soufflé dish and boiled water for a water bath. I came up short in the ingredient department: my cream of tartar container was empty (yes, sadly I really do have a container for cream of tartar) and I messed up with the eggs using one yolk instead of two. In the end, I was happy with what went into the oven and looked forward to impressing my girls with a lofty soufflé.

Alas, the wax-paper collar was a waste of time as my soufflé did not reach the impressive heights I had hoped for. But it was still pretty, airy, savory, and made a fine entree. I’ll wait for a more successful attempt to share the recipe as the result couldn’t be what the authors intended. 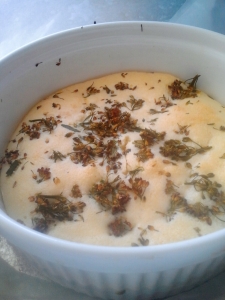 not rising to great heights

After the soufflé had gone into the oven, that mousse was still on my mind. When googling National Chocolate Mousse Day (research was needed to establish credibility, yes?), I’d found Melissa Clark’s recipe, which called for just chocolate and water. Intrigued, I had to try. Twelve ounces of chocolate-rum melting wafers (purchased long ago at a bakery supply store and finally finding a use) melted down with 1 cup water. Next, the mixture was transferred to a bowl set in an ice bath, then beat 5ish minutes until achieving the chilled, light, and airy consistency that is chocolate mousse. I couldn’t resist adding a dash of vanilla and when I did, the mixture firmed up. Perhaps adding another liquid catalyzed the mousse making?

No matter the how and why, my mousse was everything I wanted it to be: rich but light, sweet but dark, dense but creamy. I’m still marveling that all that was needed was chocolate, water, an ice bath, and some muscle. (I’m partial to my grandma’s hand-me-down rotary egg beater, but an electric mixer would have made it effortless.) The recipe source had suggested folding in a whipped egg white for extra lightness, but I liked the denser consistency of using only chocolate and water. A sprinkle of fleur de sel added texture and flavor.

While I understand the value of meal planning, I also appreciate the opportunity to make it up on the fly. When I woke up this morning, I had no clue that learning of a foodie “holiday” would determine the course of my evening meal. But with an open mind (and a full pantry), anything is possible.

My family eats well more often than not, but meals can admittedly be hit-or-miss. Depending on how much time I have that day, and how many leftovers are in the fridge, my loved ones may or may not get a … END_OF_DOCUMENT_TOKEN_TO_BE_REPLACED