One of the cost-saving decisions my family made a few years back was to cut the cable cord. We supplement basic channels with streaming and it seems to be enough. I don’t feel I miss much sans the umpteen-zillion channels … END_OF_DOCUMENT_TOKEN_TO_BE_REPLACED

The hardest part of monthly guest posts at Blog of Funny Names is coming up with that funny name. Committing to a food-related name helps narrow the field, but I’m never sure where to look for a name that is fun, fresh, interesting, relevant, and unique enough to be considered “funny.”

Googling always saves the day, but I still need a direction in which to head. This month I got that direction from a small inner voice whispering, “molecular gastronomy.” [While hearing small voices might qualify me for professional help, your reading this might qualify you for the same so we’re in this together. Stay with me? Please?]

So. Searching “molecular gastronomy” was exactly what I needed to do and we all benefit because 1) I found an amazing man named Hervé This, whom I now admire greatly and 2) I thought I’d try a bit of kitcheny science over here as well.

Those kitcheny science results are as laughable as they are delicious and we’ll move on to them as soon as I can convince you to hop over and learn a bit more about Hervé. Click here, then please return for a doozy of a chocolate cake experiment.

Back for cake? Very good, then. Learning about Monsieur This inspired me to find a recipe I remembered seeing on Foodography, a favorite Cooking Channel show. Self-proclaimed food nerd Jeff Potter demonstrated a microwave chocolate cake leavened only by N2O gasses in the cream whipper that dispensed the batter.

Long a cream whipper fan, I’ve used mine only to whip cream and branching out sounded like fun. A cake leavened with nitrous oxide instead of chemicals–kitchen science indeed.

Though the recipe threw me a bit: Four ounces chocolate, four eggs, plus smaller amounts of flour and sugar. This sounded like multiple servings, but best I could understand, it all went into one glass. Mention of only filling the “pan” two-thirds full should have been my clue, but after studying the recipe closely, I saw no mention of anything more than one serving. I filled that mug to the top. (also added a dollop of marshmallow fluff after half-filling with batter per recipe suggestion) 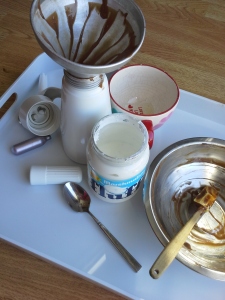 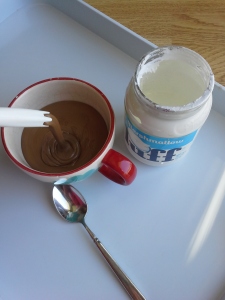 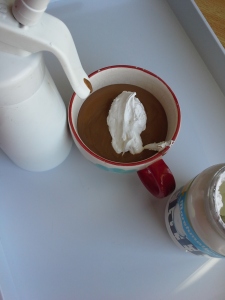 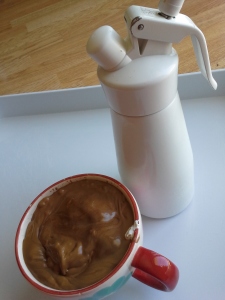 ready for the microwave

The first 30 seconds in the microwave didn’t “bake” the batter through, so I added four more 30-second intervals. And by the first minute, the batter was up and over the side of the mug. For sure this recipe is meant to serve four and shame on me for not getting that.

no words for this

Just the same, this offers opportunity to turn disaster into triumph. (It’s a game I often play called, “I meant to do it this way.”) The cake turned out nicely on a platter, a bit of gooeyness on the top (now the bottom) adding to its charm. Dusting with powdered sugar, as advised, crowned it in glory and it was happily ever after. 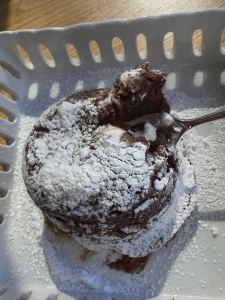 Add a side of ice cream or sweetened whipped cream and it’s restaurant worthy.

No question the batter was meant to be divided evenly among four glasses. Though the numbers divide in half easily enough, making two servings an option as well.

While this was fun, and meeting Hervé was worth any amount of kitchen mess, my next microwave cake will be of the chemically leavened mug variety. Fortunately, another Liz–of Tip Top Shape–has me covered with her funfetti version.

I raise my future mug of Liz’s Funfetti Mug Cake to you all for spending time with me here and over at Blog of Funny Names. I look forward already to our next food adventure.

When the Food Network debuted in 1993, I didn’t get too excited. I was already living a food-centric life and didn’t care to watch food-based television as well. (Unless the “foodie” in question was Julia Child–then I wanted a front row seat.)

How, then, did I become a Cooking Channel junkie? This FN spinoff launched in 2010 and is described as airing more instructional (read: less reality-based) programming. I don’t necessarily watch for the recipes (though I have found a few–check out Chocolate Diablo Cookies). More often, I enjoy the host’s style and personality or the interaction of a larger cast of characters. The following have been some of my faves:

Chuck’s Day Off – Chuck Hughes has my vote for best-looking and most charismatic on-air celebrity chef.

Food Jammers – Three 20-something guys strip food production (frying, brewing beer, making ice cream, etc) down to its most basic. They visit hardware stores and the like to come up with wackadoo contraptions that somehow get the job done. Projects include a taco vending machine, cheese cave, and cityscape made entirely from chocolate.

There’s plenty more, and I realize many of these shows got their start on FN, but bringing them all together on Cooking Channel makes sense to me.

When my husband mentioned he had heard that Eat Street was coming to the Minneapolis/St. Paul area to film, I was jump-for-joy happy. I could hunt the crew down and possibly watch the filming of a favorite TV show! A quick online search uncovered which food trucks the show would visit and when. Today was my best chance of making the location (Gastrotruck, Rice Park), so I met my husband for a lunchtime stroll through downtown St. Paul.

We found Gastrotruck and saw filming taking place a block or so away from the actual truck. I had meanwhile spotted a new truck, Tiki Tim’s, that I’ve wanted to try, so ordered up their fantastic fish tacos. They were nicely garnished with chili-dusted crema and fresh cabbage, cilantro, and green onions. With lightly battered and freshly fried fish, these tacos were tasty, even more so just because they had been thrown together in the back of a truck. I dutifully snapped photos of my food, the truck, and menu board.

We then wandered over to Potter’s Pasties & Pies where my husband got a beef pasty and I enjoyed an order of their much-lauded banoffee pie. Syrupy caramel, thin and lovely banana slices, rich and slightly sweet marshmallow cream–yum. Again, photos taken of truck and food.

Last stop was circling back to Gastrotruck as the camera crew was finally filming the truck. I had hoped to catch sight of James Cunningham, Eat Street host, but no go. Clearly they keep the star talent at home. The peanut butter bread pudding I wanted to order was Sold Out (dang!); instead, I tried the quinoa salad. (Didn’t want another full entree, though would have managed to find room for that second dessert.) A crew member approached and we chatted, but because I hadn’t ordered one of four menu items they were featuring, I wouldn’t make the filming cut.

If that wasn’t enough of a downer, remember my photos? Stunning fish tacos? Crazy good banoffee pie? Quirky food trucks and their menu boards? When I got around to posting my pix, I could find only the Gastrotruck picture and a message that my SD card had “failed and erased.” Arrrgh. I don’t have photos, I didn’t meet JC, and I wasn’t interviewed on a national television show. Them’s the breaks.

On the up side,  I got a long walk in on a gorgeous day (with my husband, which means I get bonus “date afternoon” points) and enjoyed seeing and even eating from multiple food trucks. In the end, I’ll still call it a good food day.

the only surviving photo of my most delicious day

My kids and husband were gone at various activities tonight, which means I was home alone. This never happens. Ever. My afternoons are usually spent solo, but those are work hours, so I’m usually focused on whatever task is at hand. Having a few evening hours to myself was positively intoxicating. What to do? Cooking Channel (Unique Sweets marathon) and my laptop beckoned. I’d had supper before the family left, but watching shows devoted to dessert left me no other option than to have dessert myself.

Since it was just me, I was tempted to grab a box of Girl Scout cookies or an IKEA chocolate bar from the cupboard. But then I remembered advice I’d once gotten about treating yourself as well as you’d treat a loved one. Would I hand my daughter a box of Thin Mints and tell her to go at it? That in mind, I sliced a (healthy-size) wedge of Sticky Toffee Pudding onto a crystal plate. (Had made the cake over the weekend after receiving a surprise gift of fresh dates in the mail.)  I drizzled warm Brandy Caramel Sauce over the date-studded cake and finished it off with a shot of whipped cream from my cream whipper. (I love my cream whipper.) It was a lovely and satisfying treat on so many levels. I don’t imagine I’ll be Home Alone again anytime soon, but the next time it happens, I’ll know to take out the crystal plate and top it with something spectacular. Just for me.

Sticky Toffee Pudding for one!