Doing It Yourself is all the rage these days. Reality TV is ripe with programming devoted to folks doing their own pretty much everything. I’m not a fan of reality TV and you’ll never catch me sewing my own clothes, making my own (or anyone else’s) jewelry, or refurbishing anything in my house. I’m just not crafty like that.

But I have always been a fan of cooking and baking from scratch. Homemade bread? DIY. A batch of cookies? DIY. A pot of soup or broth? DIY.

With the proliferation of do-it-yourselfers, the bar has been raised for what can be done in the kitchen. The food section of this week’s local paper headlined with a piece on grinding your own meat. I’ve also been seeing more about homemade butter (it’s as simple as overwhipping cream), yogurt, and cheese. And then there’s the wave of home brewers and wine makers.

A new cookbook that speaks exactly to this point was also featured in a recent newspaper story. The Homemade Pantry: 101 Things You Can Stop Buying & Start Making by Alana Chernila got my attention. This is my kind of book. Make your own foods so 1) you know exactly what’s in them and 2) you aren’t spending hard-earned dollars on foods you can easily make yourself.

I made the recipe offered alongside the newspaper article as it mimicked one of my oldest daughter’s favorite snacks–cheese crackers. I buy them occasionally, but consider them little more than junk food. If I made my own (and they passed her taste test), I could offer her my version of Cheez-Its. They’d contain “real food” ingredients–no additives, preservatives, etc. Also, I’d be paying for ingredients, but not the manufacture, packaging, and marketing that goes into processed foods.

My Cheez-It fan and I whipped up these crackers tonight. The dough took only a few minutes to make and I froze it for only 10 minutes instead of refrigerating for 2 hours. It still rolled out perfectly. I cut the crackers with a crinkle-cutter, but a knife or biscuit cutter would have done just as well. The dough baked up beautifully and the resulting crackers were pretty and tasty–salty, rich, savory, exploding with cheese flavor. I used the Cheddar called for in the recipe, but it’d be fun to change it up depending on your mood or your family’s preferences: mozzarella for pizza lovers, pepper-Jack for those who like it spicy, sharp Cheddar for an extra punch. A teaspoon of dried herbs would also add distinction.

Though these crackers aren’t as crispy as what you find in that red box (might need to fry ’em up for that), my daughter gave them a rating of “good to great” which is high praise from her. I’ll probably buy the book as I’d love a collection of such recipes all in one place. The article mentioned homemade pop-tarts which sounds like a delicious project. Definitely a DIY I would Do.

adapted only slightly from The Homemade Pantry: 101 Things You Can Stop Buying & Start Making by Alana Chernila

In mixing bowl, use paddle attachment to beat together butter, flour, mustard, and salt 30 seconds or just until crumbly. Add cheese; beat on low speed 30 seconds longer or just until mixed.

Heat oven to 325°F. On lightly floured surface, roll dough 1/8-inch-thick. Cut into small squares or rounds. Place on baking sheet. Bake 30 minutes or until lightly browned. Cool on wire rack. Makes about 40 (2-inch) crackers. (I cut them smaller, so got about 60 (1 1/2-inch) crackers.) 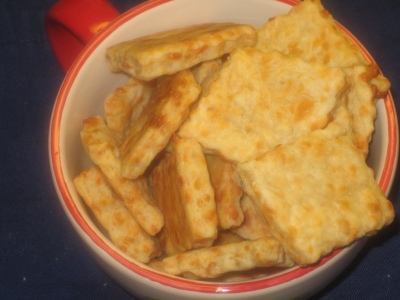