Last week’s food for fun post brought you ice cream to beat the heat. Seeing as how this week is hotter than last–at least here in St. Paul–I’m still searching out foods to cool me down. Which is why the following headline caught my eye: “Cocktails-on-a-stick look like kid’s food, but boozy treats are for adults.” A bit wordy, perhaps, but I was all over the concept. Cocktails on a stick? Sign me up!

The article appeared in a recent St. Paul Pioneer Press, but was originally written by Jill Wendholt Silva for the Kansas City Star. It introduced me to Laura Fyfe’s Poptail and though I’d seen a version of this frozen treat at Attempts in Domesticity, I’d not yet realized it was a trend in the making.

Silva mentioned that “plenty of folks are getting on the poptail bandwagon,” talked of the poptail’s popularity on Pinterest, and cited Food & Wine‘s July issue’s Mojito-Watermelon pops. Clearly poptails are the next cupcake and it’s a trend I couldn’t wait to follow. Setting my sights on the Gin Zing, I made a batch tonight.

Pureeing 1 1/4 cups diced cucumber and 1/2 cup St. Germain with a stick blender (though the recipe suggests a food processor), I then strained it through a fine-mesh sieve. 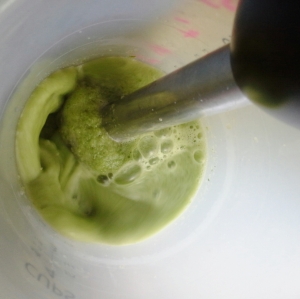 Half of the solids left behind were stirred back into the strained liquid and 1/4 cup gin was stirred into that. 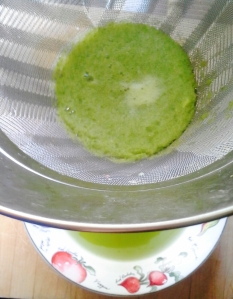 I had cut the recipe in half, so was set up to make three poptails (oh, how I love that word), but I used shot glasses and was able to fill six and still have enough left over for a chef’s sample. (It was way too sweet unfrozen.)

I popped the poptails into the freezer and checked back an hour or so later, when the mixture was frozen just enough to hold the (half) popsicle stick upright. Another hour and they were frozen enough to unmold. The recipe called for a seven-hour freeze, though I wasn’t patient enough to let it go that long. 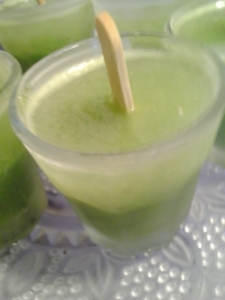 They were pretty little things and also quite tasty and refreshing. Sweet was the first hit on the taste buds, but booze was a close second as was the fresh green flavor of the cucumber. Next time (because there most certainly will be a next time), I’ll stir in a few grindings of black pepper or a teaspoon or so of freshly grated gingerroot for extra kick. But even as-is, these simple poptails are the bee’s knees.

Which brings me to Silva’s other flavors: Bee’s Knees (!) containing honey, whiskey, and ginger beer and The Jaliscito with lime zest and juice, watermelon, tequila, and Grand Marnier–both must-makes in my book.

Silva recommends using wooden craft sticks instead of plastic popsicle mold sticks as wood grips the softer ice mixture better than slippery plastic. She also cautions against using too much alcohol lest the mixture fail to freeze completely. Though should that happen? Silva notes that these poptails easily morph into an adult snow cone or slush. And I won’t argue with that, especially in this heat.