Yesterday, I escaped suburbia and had a blast doing it. Large cities invigorate me. The air seems charged somehow. I breathe deeper, my blood flows stronger–cliches, yes, but everything is more alive. My life in the ‘burbs is a good one and there are solid reasons I live where I do. Just the same, when I have a chance to go urban, I grab it.

Which is why I was happy to join a friend for lunch at Eat Street Social. This stylish spot, just two-weeks young, was too hip for signs, so it took me a while to figure out exactly where it was. Once I (finally) found the door, I sat in the darkly paneled dining room and ordered a salad (greens, pickled radishes, sliced kumquat) and grilled turkey sandwich. The sandwich was decent enough, but Jen’s burger beat it for taste.

My favorite “dish” was the cocktail. I had recently seen the Copper Dagger reviewed and knew I had to try it. Ingredients: verna Amaro, Lemon Hart 151, St. Germain, lemon, and egg white. While I don’t know much about the first three spirits (though had just read about each in Boozehound), the drink seemed sophisticated and I liked the idea of frothy egg white crowning my cocktail. The Copper Dagger was fantastic. My dessert–chocolate-olive oil cake–had a slew of lovely and tasty garnishes: salted Marcona almonds,  coffee ice cream, vanilla syrup, and a terrific buttercream, but the cake itself was a touch dry and try as I might, I couldn’t detect the olive oil.

Walking back to my car, I passed Truong Thanh, a Vietnamese grocery. Remembering that I needed fish sauce, I added the shop to my itinerary. Ethnic grocery stores thrill me–strange packages with wording I can’t read; unfamiliar produce, meat, and dairy; foreign cooking equipment and serving dishes. I love walking the crowed aisles trying to decipher products, even if just by photo. I eventually selected a fish sauce, but also found green tea pumpkin seeds, a strainer skimmer, ginger candies (the same brand my daughter enjoys at half the price I usually pay), and lemongrass. At check-out, I struck up a delightful conversation with the owner, a tiny older woman, about acupuncture and Chinese herbs. Making this connection was fun and amazing; who sees–much less chit-chats with–the owner of a local Costco? Another reason the city brought me to life.

My last stop was Rye Delicatessen–a much talked-about and reviewed new eatery in Minneapolis. There’s been so much hype (it’s amazing, it’s rotten, everything in between), I wanted my own take on it. Filling a brown bag with goodies (black-and-white cookie, ruglach, sour cream and bacon knish, day-old bialy), I tried it all and concluded it was indeed good stuff–amazingly buttery would be my overall descriptor. But I also decided that Jewish deli food isn’t my thing–too heavy. My mission completed, I found the freeway and flew home in time to get my girls off the school bus. I’d enjoyed a great foodie escape and look forward to the next. 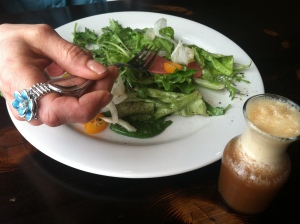