This weekend I enjoyed one of the craziest–and most fun–meals I’ve yet to experience. Gracious friends invited us over for shabu-shabu–a Japanese dish that owes its name (if Wikipedia is to be believed) to the sound the food makes as it cooks in bubbling broth–along with the host’s amazing margaritas. Already known for his margaritas, our friend had kicked things up a notch after a recent trip to Cozumel. He promised they were even Better now that he was using a homemade lime sour mix. I was asked to bring dessert and also slipped in an app as I’d just seen a Must-Make-This-Now recipe in a recent Bon Appetit.

So, we have Bacony Roasted Chickpeas: a Mediterranean-American-Italian appetizer. 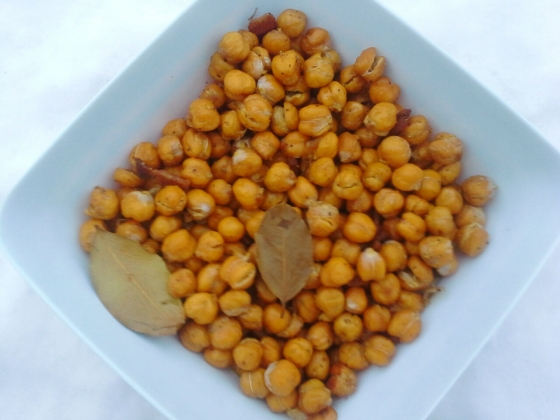 tasting as good as they look

They were simple to make–just a handful of ingredients–and went down easy with the made-to-order margaritas.

The shabu-shabu was also great fun. Think fondue with an ethnic, less kitschy twist. Our hostess had set it up perfectly: Both halves of the pot held boiling broth, though one half also had a few drops of hot sauce added. Ingredients from the trays of prepped food (gorgeous shrimp, fish balls, mochi, shiitake mushrooms, bok choy, tofu, sprouts, udon) were tossed into the broth with chopsticks, then fished out when cooked as desired. Between “interactive eating” and the fabulous ingredients, this meal was as stellar as they come. As we enjoyed tossing and fishing (and eating), we patted ourselves on the back: save the tequila in the drinks, this was crazy-healthy party food. 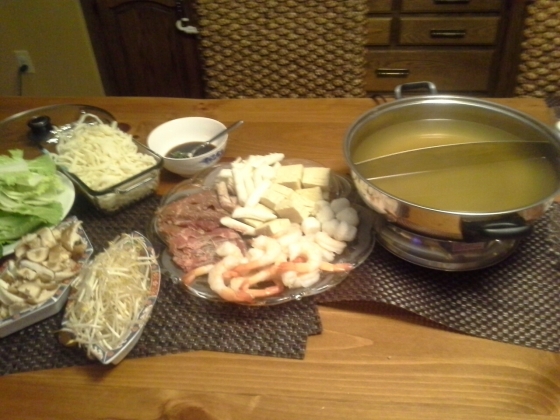 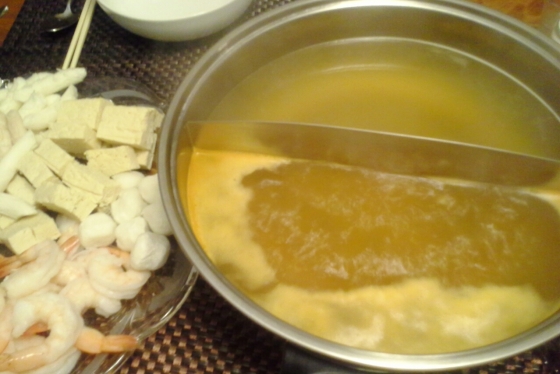 Those back-pats ended, though, when the ice-cream cakes came out. With extra mint-chocolate chip ice cream on hand, I’d made two layer cakes of chocolate cookie crumb crusts (14 or so ounces cookies crushed to crumbs and mixed with 1/4 cup melted butter, then pressed into a 13x9ish-inch pan and frozen), a thick layer of minty ice cream, generous drizzles of homemade hot fudge sauce, and clouds of sweetened whipped cream. With cases of Girl Scout cookies in the basement, I couldn’t resist topping the cakes with cookie pieces. One cake might have done it for the amount we needed; I made two so I could stir creme de menthe (3 or so tablespoons) into the ice cream that went in the cake for the grown-ups. It was Grasshopper Cake, after all.

Adding the pepperoni pizza ordered in for the kids, this was quite a feast. A culinary mash-up indeed. Here’s to great meals and great friends and great times. If you want to entertain, but worry think that you can’t come up with the Perfect menu, take a page from this post. The foods don’t have to go together. They need only to be made (or purchased) and eaten in the spirit of friendship.